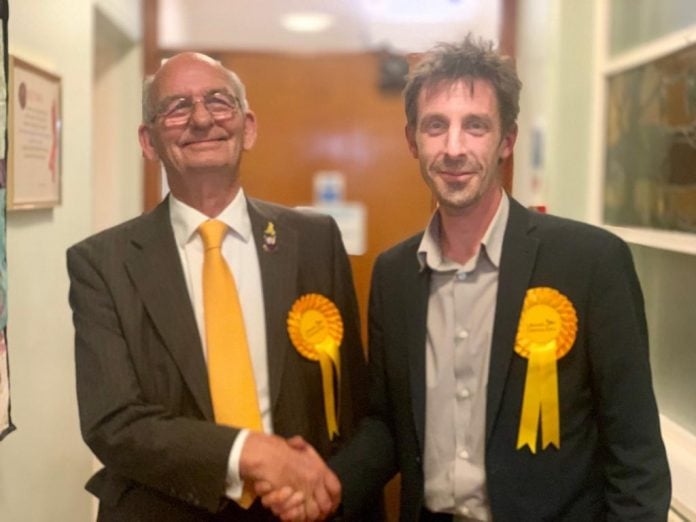 The rainbow coalition has kept control of Broxtowe Borough Council after the Liberal Democrats won both seats in a crucial by-election.

Had the Conservatives held both seats, they would have narrowly regained control of the council, which they lost in the borough-wide election last month.

This is because they would have had 22 seats compared to the 22 of the coalition, but the Mayor, who is a Conservative, gets the deciding vote in the event of a tie.

Since the election, a broad coalition formed between Labour, the Liberal Democrats, and three independent councillors has provisionally run the council. Together, they now have a majority of four.

The result means the Conservatives have 20 seats, Labour has 14, the Liberal Democrats have seven, there are two independent councillors and one member of the Ashfield Independents.

The by-election was held after the death of Conservative councillor Chris Rice, who was a candidate in the borough-wide elections.

In 2015, the last time the ward was contested, both seats were held by the Conservatives.

Speaking shortly after the result was announced at Broxtowe Town Hall, Councillor Grindell said: “I was surprised that the majority was as big as it was, I knew we could win but that we’d have a fight on our hands.

“This by-election determined the control of the council for the next four years. We’ve worked with Labour before and we worked very well together, and we want to continue doing what we can for the people and for the borough.”

Councillor Hallam, who had spent some of the evening celebrating his wife’s birthday, said: “I haven’t fully taken it in yet, we’ve been working so hard towards it, so I’ll take a break and I’m sure it will hit me later the magnitude of it.

“Our aim has always been, even before we knew the balance of power was at stake, we were still focussed on giving Stapleford its fair share.

“The impact we can have (as the smaller party in a coalition) is I hope at least proportionate to the number of seats we have in the coalition.”

Councillor Greg Marshall represents Labour for Beeston West, and said: “Obviously it’s disappointing for us in the Labour party because we were so pleased with the campaign Sue and Eleanor ran, they fought a really positive campaign and that hasn’t produced the result we would have liked.

“That said, we congratulate David and Tim, and we look forward to serving with them in the Labour-run coalition in Broxtowe.”

Asked whether he thought the coalition would stay together for the four years until the next round of elections, councillor Marshall said: “There might be some difficult times now and again, but what we are all committed to doing is reversing the negative policies the Tories have slavishly adhered to, and the cuts over four years, and in coalition we have a community objective to do the best for the people of Broxtowe.”

Conservative councillor Philip Owen represents the Nuthall East and Strelley ward. Speaking before the result was announced, he said: “Whatever the result it’s going to be closely balanced, and it will focus minds.

“People will have to ensure they turn up to meetings, and if we are in the unfortunate position of being in opposition then we will challenge them and hold them to account for as long as the coalition holds together.

“We are still by far the biggest group on the council, and in some ways it’s a bit of a smack in the face for the people of Broxtowe that they didn’t vote for either Labour or the Liberal Democrats but that’s what they’re going to end up with.”

The results in full

What’s On in February 2020 at Royal Concert Hall Nottingham

Two people who were on trial in connection with a murder conspiracy have been cleared, as the case against six other defendants continues.Eight people...
Read full story
News

Nottinghamshire Fire and Rescue service (NFRS) attended a report of a car that had been completely submerged in the River Trent, Gunthorpe at around...
Read full story
News

Man in hospital after rescue from car in River Trent

A man has been taken to hospital after a car went into the River Trent at Gunthorpe.Passers-by and boat owners helped officers pull the...
Read full story
© Newspaper WordPress Theme by TagDiv