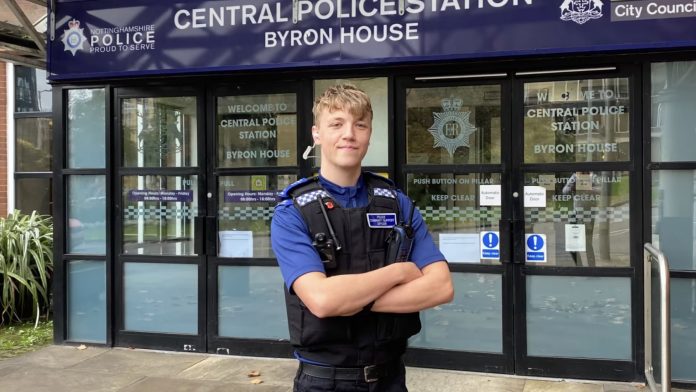 The saying “if you’re good enough, you’re old enough” is a philosophy most associated with sport – but one Police Community Support Officer (PCSO) is proving it also applies to policing.

His sergeant Simon Lacey said everyone in the city centre neighbourhood team had been impressed with how he’s performing.

“He’s been getting on great,” Sgt Lacey said. “He’s enthusiastic, switched on and is keen to learn. He’s only 18 so there’s plenty he’ll need to learn but we’re really pleased to have him as he’s already showing a lot of potential.”

PCSO Emily Fisk, who is Solomon’s tutor, added: “He’s received so much good feedback. He loves talking to people whether it’s members of the public, students or engaging with the homeless.

“He gets a bit of jip about how young he looks but he just bats it off and has a little giggle with people about it. He looks young but he’s also very grown up and very capable.”

Prior to joining the police, Solomon undertook a public services course at Loughborough College – learning about how emergency services operate.

Whilst he already knew he wanted to join the police, it was the course that inspired him to apply for a job as a PCSO – a role first created in 2002 to help create a more visual presence within communities.

Solomon said: “It all started when I was 12 and I saw a police car whizz past me. I looked at the blue lights flashing and went, that’s what I want to do. However, it wasn’t until I started my public services course that I really started to understand the role of a PCSO and how valuable they are to both the police and the community.

“The role of a PCSO appealed to me as they are one of the most front-line support networks for both the public and the police. They are a vital link that connects the public to the police. I like the fact that PCSOs get involved within their community, attending events and projects and meeting people.”

As part of his early development, Solomon is currently accompanied on the beat by more experienced PCSOs and it’s helping him thrive.

“These past weeks have been amazing,” he said. “I’ve seen my confidence shoot up massively and feel I’m developing great skills in communication. I like how varied my days are, I could be collecting CCTV for officers and then the next day being called out to complete crime scene management, where we stand at the cordon of crime scenes to prevent evidence being tampered with.

“One thing that has become apparent is how 99% of the public we meet are supportive of our work and want to work with us. This came as a bit of a surprise to me because how the police service is sometimes portrayed by the media.

“It’s great that the public have been largely supportive – although given my age and the fact I have a bit of a ‘baby face’, I do get comments like ‘how old are you’ and ‘does your mum know you’re here’. Most of it is harmless banter so I just take it on the chin really.”

Some PCSOs use their experience as a stepping-stone to a career as a police officer – but Solomon is keeping an open mind as to his own future.

He said: “It’s always been an ambition of mine to join the police and, at the age of 18, I’ve done that. At the moment I’m really enjoying my job and am taking each day as it comes. Going forward I think I will always want to stay in a role that is offering support to the public.”

Nottinghamshire Police provides a variety of routes into policing in order to attract talented and dedicated candidates, whatever their background.

Get one email every evening with ALL stories for that day.

£2.5 million worth of drugs found in two Nottingham city raids