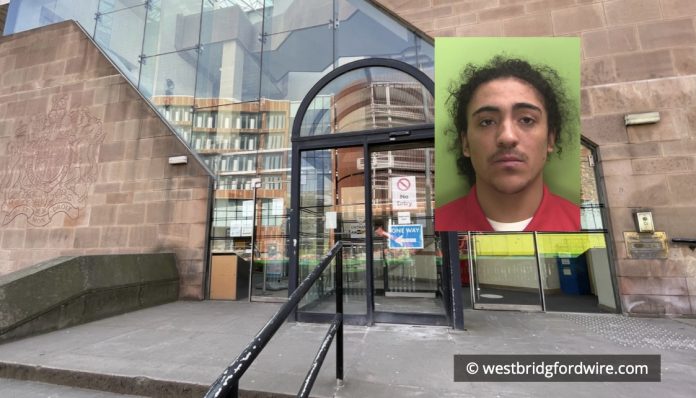 A nuisance biker who left a pensioner in a coma by crashing into him after performing wheelies has been jailed.

Nicholas Marshall was part of a large group of off-road bikers wreaking havoc on the streets of Clifton on 11 October last year.

The 24-year-old – who was under the influence of drugs – sped through a red light on a pedestrian crossing before performing the one-wheel stunt as he undertook a stationary tram at a stop in Southchurch Drive.

Marshall then collided with a 71-year-old man on the nearside as he was crossing in front of the tram.

The pensioner sustained serious injuries that left him in a coma for over a month. He suffered a head injury along with broken ribs and a fractured spine.

Marshall was also seriously injured after crashing into a bollard following the collision and required surgery.

Tests found he was seven times over the legal cannabis threshold for driving.

He pleaded guilty to causing serious injury by dangerous driving, drug driving, driving without a licence and driving whilst uninsured.

A judge sentenced him to 16 months in prison and disqualified him from driving for three years and eight months.

Following the sentencing, PC Mark Davey, of Nottinghamshire Police’s Serious Collision Investigation Unit, said: “This case should act as a stark warning to anyone who thinks they can recklessly ride an off-road bike on public roads and get away with it.

“Not only did the pedestrian end up in hospital with serious injuries, but so did the defendant.

“Marshall, along with the rest of his group, showed complete disregard for other people that day and he has paid the price, firstly in hospital and now in the courts.

“I hope this sentence sends a message out that this type of antisocial behaviour – and drug driving – can have devastating consequences and will not be tolerated.

“Indeed, incidents like this are why Nottinghamshire Police works so hard to confiscate off-road bikes where they have been used in an antisocial manner. Officers do not seize bikes to be killjoys, they do it to protect the public.”

Last month, police on off-road motorcycles sent a clear warning to antisocial bikers as they went out on a day of targeted patrols.

Officers from the force’s off-road bikes team visited the Broxtowe area in response to local concerns about noisy and potentially dangerous riders.

Team members, accomplished motorcyclists who volunteer for the role in addition to their day-to-day duties, visited the Beeston Rylands area, the Attenborough nature reserve, Greenwood Community Centre, The Sidings at Toton and Stapleford, Bramcote Woods and Toton Tram stops.

Neighbourhood policing teams across the county have also seized a number of illegal bikes as part of a county-wide crackdown in hotspot areas over the past year.

Inspector Karl Thomas, of the City South Neighbourhood Policing Team, which covers Clifton, said: “We know that people riding off-road bikes anti-socially is a real concern in our communities. They are intimidating, a noise nuisance, tear-up grassland and pose a danger.

“We are listening to those concerns and have responded by running a series of operations to target offenders which will continue. We will seize their bikes and take them to court; it won’t be tolerated.”

As well as seizing bikes and prosecuting riders to tackle the issue, Nottinghamshire Police is encouraging off-road bikers to explore areas in which they can legally enjoy their bikes.

The force has compiled a list of more than 20 legal off-road biking venues – all within easy reach of Nottingham.

In total there are more than 20 legal locations within 75 miles of Nottingham – with facilities that cater for a range of abilities.

A supply teacher groomed his victim by lavishing her with gifts and bombarding her with Snapchat messages.Police were called after rumours of Hamzah Zafar’s...
Read full story

A knife attacker has been locked up for 17-and-a-half years for his part in the vicious stabbing of a man who was left with...
Read full story

A man has been locked up for assaulting a woman and threatening to throw acid in her face.Ricky Pritchard, aged 38, entered the victim’s...
Read full story

Man jailed for sustained abuse and controlling behaviour towards a woman

A “violent and controlling bully” who subjected a young woman to a sustained campaign of harassment and abuse has been jailed.Raheeb Ibrahim, aged 25,...
Read full story

A woman has appeared in court charged in connection with a reported shop theft at a retail park.The 44-year-old from Hyson Green appeared at...
Read full story