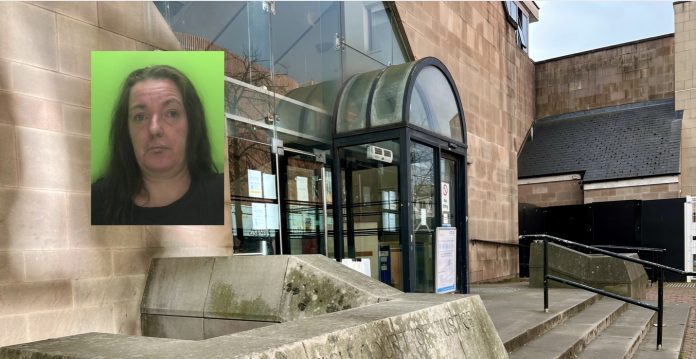 A robber who cajoled her way into an 81-year-old’s home before threatening him with a knife will spend years behind bars.

Joanne Duke befriended the pensioner by talking to him as he sold items outside his flat. But she revealed her true nature two weeks later by asking to use his toilet but then stealing £250 cash from his living room and threatening him with a knife.

Her actions have landed her a seven-year spell in prison. The 45-year-old pleaded guilty to robbery at Nottingham Crown Court after police found her fingerprints inside the flat – disproving her initial claim that she had never been in there.

Duke – who has a string of convictions including theft, assault, robbery, burglary and criminal damage – met the elderly victim as he sat on his deckchair selling items outside a block of flats in Bulwell last summer.

She spent several minutes talking to him before leaving and saying ‘I’ll pop round and see you at some point’.

That moment arrived a fortnight later when she pressed the buzzer for his flat and asked if she could come in for a chat, telling the pensioner her son had recently died. The elderly man, who lives alone, obliged and she left a while later.

A couple of days later, on July 18, she was back. This time she asked for a glass of water and to use the elderly man’s bathroom. But after being allowed in, she instead took a seat in the living room.

She then asked the pensioner if he could fetch her a towel and when he returned she was holding an envelop containing £500 of his savings. He tried to grab the envelop back and a tussle broke out between the pair.

Duke then ran into the kitchen and grabbed a cutlery knife from the sink. She then moved towards the pensioner while holding the knife above her head as if she was about to attack him.

Fearing for his safety, the pensioner retreated and Duke then fled the flat with £250 of his bank notes, leaving him shaken but unhurt.

Police arrived within minutes and enquiries led to Duke being traced to her home address a short distance away.

She was arrested on suspicion of robbery – an offence she vehemently denied during her police interview. Duke told officers she had never stepped foot inside the man’s flat, but fingerprint evidence from a glass inside the property and CCTV footage suggested otherwise.

Duke finally admitted her guilt at Nottingham Crown Court on Tuesday (4 January 2021) and was jailed.

Investigating officer PC Conor Bullivant said he was pleased with the seven-year prison term handed to Duke. He said: “This was an incredibly distressing experience for Duke’s victim and the sentence reflects the seriousness of the offence.

“Duke targeted an elderly man, in his own home, despite the kindness he showed her and I am delighted that she will not be a threat to the public for some time.

“As a result of this incident, the victim has had trouble with trusting people within the community and was put off going for walks which he used to enjoy as part of his daily life.

“He is extremely happy with the verdict received and I am extremely thankful for the bravery that the he showed throughout the investigation.”

Detective Sergeant Nick Wood, who oversaw the investigation, added: “We take any robbery extremely seriously but particularly one where a weapon is used to threaten a victim.

“The sentence Duke has received shows that behaviour like this will not be tolerated in Nottinghamshire. I am pleased with the sentence which was the result of a great effort by PC Bullivant and some brilliant team work, as well as a quick and efficient arrest by the initial attending officers.”

Collecting charity donations and packing food parcels for those in need is just some of the crucial work police officers are helping with to...
Read full story

Emergency Department attendances down across Nottinghamshire over winter

There has been a decrease in the number of people attending Emergency Departments ( A&E ) across Nottinghamshire over winter, statistics show.The emergency department...
Read full story

A man who told officers he had “a load of drugs” in the back of his car when he was pulled over by police...
Read full story

Police are appealing for help in tracking down a priceless war medal which was stolen during a burglary last week.Engraved with the words PT...
Read full story